Narendra modi is not at all a communal figure.There was not even a curfew for a single day in Godhra after modi came into power.During the previous congress government godhra was under curfew more than a month.I am not a modi fan but still i dont understand why media is always after him..
Posted by athul at 7:29 PM No comments:

Do India really need a coach? The answer in definately no because India has always performed well in the recent times without a coach.In this decade Indian Team has worked under three Coaches.Anushman Geakwad,John wright and Greg Chappell.With Gaekwad the team was little bit ok but was full of senior players under Azhar's captaincy.There is no major victory to say in specific for the Indian Team under his period.1996 Wc semifinals and Titan Cup victories under Sachins Captiancy can be highlighted here.
Next comes John Wright under whom India was more sucessfull than ever to speak.Dada's Captaincy was aggressive and quite fascinating when compared to prevoius skippers.Though ganguly did not win major tournaments he took india to 22 finals and won only one which is the darker part of his captaincy.
Greg chappell and Dravid is the next in the driver seat.Greg chappell one of the most Successfull captain for Australia and also was one of the best bastmen of his times came to coach india,his australian stratergies were taken as politics rather than as a tactics.Yuvaraj who was performing worst was given a warning that he would be chucked out if he continues the same..Then Yuvraj was the man of the series for pakistan tour and still flying now.Ganguly was chucked out of the team which broke many oppostion to chappell from politics and West Bengal people were involved in so many protestions against him.Finally Chappell resigned.

With the young blood alone India won the T20 world cup with no senior players or coach to guide the players.Though we cannot totally isolate the seniors still there is no need for a coach to do this job.The players are not small kids for the coach to teach them how to bowl and bat,everybody is in international standard.When a person is not able to cooperate with a board then how will he coach the team?.This is for Kirsten.
Posted by athul at 7:18 AM No comments:

Super Star has always been a pinnacle of indian cinema.He has acted in 153 movies so far and achieved a lot.This Link is to vote for rajini to keep a Statue at Madame Tassuads in london where statues of Amitabh,aish,sachin,Sharukh are there...Rajini is the highest paid actor In Asia and there is no doubt or there should not be any hesitation to keep Statue for him
Click on the link to vote for him

http://www.petitiononline.com/tsktsk/
Posted by athul at 10:39 PM No comments:

My hols are really boring especially after 18th of this month..y is that coz all my friends have left to their native and none of my college mates are here.if they are here i dono how time will run so fast...we used to play cricket,cards,carrom....we chat a lot..dono where we will start and where we will end with...all hot topics will be discussed...some days we have even spoken a lot throught out the nite....but now am missing everything n getting really bored thw whole day....atleast i go to play in the evening which is somewhat making me to pass my time quickly....waiting for jan 2nd for that reopening day of my friends room n not waiting for the college to reopen....no matter if its opened or closed we wont go....
Posted by athul at 8:32 PM 1 comment: 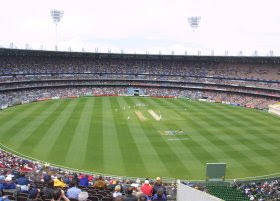 (MCG-Melboourne Cricket Ground)
These are the prevoius year Facts

India vs Australia Head to Head in Boxing day

1985 - 29,108 on Boxing Day saw the Indian spinners on top. Greg Matthews and Allan Border each scored memorable centuries in the match, but when the rains came at tea on the last day to wash out the match, India was in sight of a victory. This was Steve Waugh’s debut Test, Merv Hughes was 12th Man.
1991 - For the second season in succession, Bruce Reid (6/66 & 6/60) made the match his own by decimating India inside four days. 42,494 attended on Boxing Day.

1999 - Boxing Day was again seriously affected by having rain, but there were still 49,082 in attendance. The match against India was comfortably won by Australia by 180 runs. Melbourne’s fans were treated to the exciting Test debut of NSW speedster Brett Lee, who took 5/47 and 2/31, as well as some sparkling batting from the brilliant Indian skipper Sachin Tendulkar (166 & 52).

2003 - 62,613 – Boxing Day, 179,662 for the match. Australia defeated India by nine wickets, Ricky Ponting scoring an imperious 257 in Australia’s first innings after Indian opener Veranda Sehwag smashed a scintillating 195 on the opening day. Taking advantage of free entry on the last day, a crowd of 29,262 bid farewell to Australian captain Steve Waugh in his 17th and final MCG Test match.

The Mighty Aussies will never lose...I am not saying the history says
Posted by athul at 7:40 PM 4 comments:

My dubai trip has been cancelled due to visa problem.....my sister tried to get me visa but initially they refused to give me a tourist visa because am under 23 years..but after a long pressure they got me a visa through a hotel which sponsored me to get it.....the hotel management dint quote any conditions first but after getting me the visa they are creating a problem by asking 4000 rs per day i stay in UAE....which goes 56,000rs for 14 days which is not affordable by my family...this visa cannot be cancelled till it expires..so i ve cancelled my trip....so sad..........
Posted by athul at 6:33 AM 1 comment: