Ponting out of Twenty20 match Ricky Ponting has been ruled out of today's Twenty20 match against India in Melbourne as he continues to struggle with a back injury. Ponting batted in the nets on the morning of the game but Australia decided not to risk him and will now attempt to have him ready for Sunday's opening CB Series match against India at the Gabba.
"He pulled up pretty sore this morning," Australia's coach Tim Nielsen said. "His back is just not 100% and with the uncertain nature of Twenty20 cricket and the frantic nature of it we're just a bit concerned that if he has to dive in the first over if we're fielding and pulls up very sore it could leave us one short."
Michael Clarke will captain Australia for the second time in two months and he is set to lead a side with one debutant after Nielsen confirmed David Hussey would play his first match in Australian colours. Brad Hodge will slot into Ponting's No.3 position and Ben Hilfenhaus has been named the 12th man.
Nielsen said with the first tri-series match only two days away there was no guarantee Ponting would be available, and the travel to Brisbane was a concern. "Today's decision was all about today," Nielsen said. "We'll have to keep assessing him and see how he goes each game from here."
Nielsen was confident his players could move on from the controversial Test series and he was impressed with the resolve of the individuals in the team. "Don't for a second think that this is an easy thing to go through for anybody," Nielsen said of the aftermath of the Sydney Test. "It's been draining on our whole group. To be able to continually come out and play as well as we have as a group of individuals and as a collective team is something we're very proud of."
Posted by athul at 9:25 PM No comments: 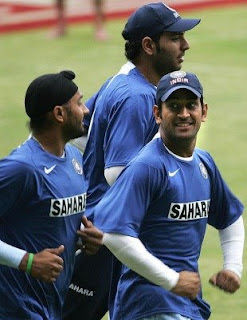 Mahendra Singh Dhoni, India's captain in the limited-over formats, has urged his team-mates to respect the international guidelines for on-field behaviour in the wake of the Harbhajan Singh-Andrew Symonds controversy. He said there would be some allowance for "chit-chat" between players as long as there was nothing untoward being uttered.
"Whoever the players are, they know the international guidelines that are set out to be followed," he said, when asked about the importance of player behaviour in the forthcoming limited-over games. "Each and every player should respect it. It is the responsibility of an individual more than their skipper to know the limitations and to know where they stand."
It was reported that the Australian players were unhappy over Harbhajan's reprieve, given that he had been handed a three-match ban in the first hearing. Dhoni would also remember the World Twenty20 match in Durban last year, a match that marked the start of the fractious relationship between the two sides.
"We don't really care about whatever has happened so far," he said a day before the Twenty20 international in Melbourne. "It's a fresh start and we're going to play some good cricket. There's always chit-chat going on between the players. If nothing controversial is said, I think both the teams will be happy with it. We can't just shut up and play. It's cricket and you've got to do lots of things with the bat and the ball and there should be chit-chat out on the ground."
Dhoni preferred that contentious catches be referred to the third umpire, a procedure which was used in the final two Tests of the series. Before the first Test in Melbourne, Anil Kumble and Ricky Ponting had agreed to take the fielders word but reviewed the pact after the controversial Sydney Test. "I believe in referring it to the third umpire," Dhoni said. "A fielder can mislead so it's important that it's referred to the third umpire."
Was he expecting a hostile reception from a crowd that's expected to be close to 90,000? "If they are not on the field it does not really matter," he said. "We don't care whether we receive a hostile reception or not. In Eden Gardens there are 100,000 spectators, in Kochi there are 80,000 spectators. Still, this is a huge ground and playing in front of such numbers would be exciting."
Posted by athul at 9:30 PM No comments: Three Indians, two Sri Lankans and an Australian have been named as the winners in the inaugural Cricinfo Awards, which recognise the outstanding batting and bowling performances in all three forms of the game during 2007.

The lists of nominees, announced in December 2007, were compiled by Cricinfo's global staff. The winners were selected by a jury put together by Cricinfo for this purpose, which consisted of Geoffrey Boycott, Ian Chappell, Daryll Cullinan, Tony Greig, Michael Holding, David Lloyd, Sanjay Manjrekar, Ramiz Raja and Ravi Shastri. The final selection was based on a ranking of the performances by the jury, with the players who fetched the most points winning the respective awards. In the event of a tie, the player with the most top nominations was selected as the winner by the jury 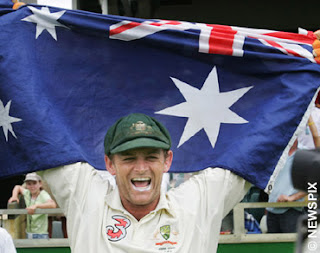 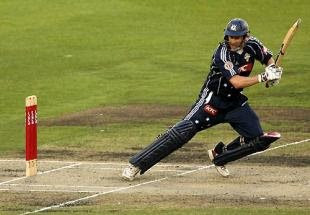 Younger brothers often want to be like their older siblings, although the desire typically disappears before adulthood. But for the past four years David Hussey has craved the chance to emulate his big brother Michael and burst into the Australia cricket team. Finally, he has an opportunity to do so.
Hussey's call-up into the Twenty20 squad for Friday's international against India is much-deserved, and any thought that his surname helped him get there would be severely misguided. It has been anything but easy living in the shadow of Mr Cricket, who made his first-class debut at 19 and had such an impact at Test level that his average is second only to Don Bradman.
It is unfair to compare the brothers, as they have grown into fundamentally different people since their childhood days playing backyard cricket in the outer Perth suburb of Mullaloo. Michael, a left-hand batsman, is an obsessive planner whose mind is constantly racing with instructions to himself; the right-handed David is more laid-back and once while standing in as Victoria's captain admitted at the toss that he hadn't even checked his team sheet to see who was playing.
Perhaps he was still overwhelmed at leading his adopted state after several years earlier venturing 3500 kilometres from Perth to pursue his career in Melbourne. It took consistently high scoring at the Prahran club before Hussey was given a chance by Victoria at the age of 25. Similarly, ridiculous aggregates in county stints at Nottinghamshire and sporadic flashes of brilliance in Australia were ignored by the national selectors until he found greater consistency.
Enough was enough after 911 runs at 53.58 for Victoria last season, 643 at 64.30 so far this summer, as well as 237 runs at 47.40 and a strike rate of 153 in this month's Twenty20 tournament. Merv Hughes, the Melbourne-based selector, has seen plenty of Hussey and knows he is arguably the prototype Twenty20 cricketer.
His aggressive batting is complemented by offspin that is superior to most part-timers, and he is one of the most gifted fieldsmen in the country. A strong bottom-hand batsman, Hussey is sometimes in such a hurry to score that it's like he has just remembered his car is in a tow-away zone and he knows he'll have to walk home if he doesn't finish the game as soon as possible.
He loves to get on the front foot and lean in to drive to either side, but he is equally unafraid to swing the ball over midwicket. Hussey's strike-rate of 141 in 44 Twenty20 matches is remarkable, and he brings the same gusto to the longer forms. His greatest moment came in 2003-04 when he guided Victoria to a fourth-innings chase of 455 against New South Wales and his unbeaten 212 came from only 218 balls.
Since that moment the younger Hussey - he is now 30 - has been talked about as a potential international player. Victorian fans were often parochial in their calls for Dean Jones to be recalled to the national set-up and their bewilderment at Hussey being overlooked until now is not surprising.
Fittingly, his debut in Australian colours will come at his adopted home ground, the MCG. Hussey has come a long way from Mullaloo, physically and chronologically, and Australia could not ask for a more exciting pair to become the first brothers to represent the country since Steve and Mark Waugh
Posted by athul at 9:47 PM 2 comments:

Scientists and students at IIT mumbai have claimed to have developed a unique mobile nano device which can record heartbeat of a person constantly for 12 hours.They have developed a silicon locket which will record ECG for 12 hours in one change of battery.The standard mobile interface will help the user send the sms to the doctor about the latest ECG which will help the patients immensely.
Its a hand held device,which will be with a patient all the patient all the time and once fully charged the battery can record 12 hours of ECG.With constant ECG recording the doctors can find out where the actual problem is and can diagnose and treat more efficiently.The movile device will hit the market very soon.
Posted by athul at 8:06 AM No comments:

Azhar insulted in the ground 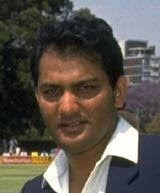 What began as a naive invitation to the former indian Captain has turned in to the ugly episode,bringing back the haunting memories of the match--fixing controversy that had rocked indian cricket in the late 1990s.And at the centre of the storm is the name that comes to mind first-Mohammad Azharuddin.

During the course of the first day's play of the test match between india and pakistan Azhar accompanied by chief selector dilip vengsarkar nad some top CAB oficials had casually walked over to the indian team's Dressing room overlooking the ground.

That was when the ICC anti-corruption officer at the match,former CBI stalwart NS virk politely asked Azhar to step aside and stay away from intreacting with the players at the ground when the match is going on
Posted by athul at 10:29 PM No comments: